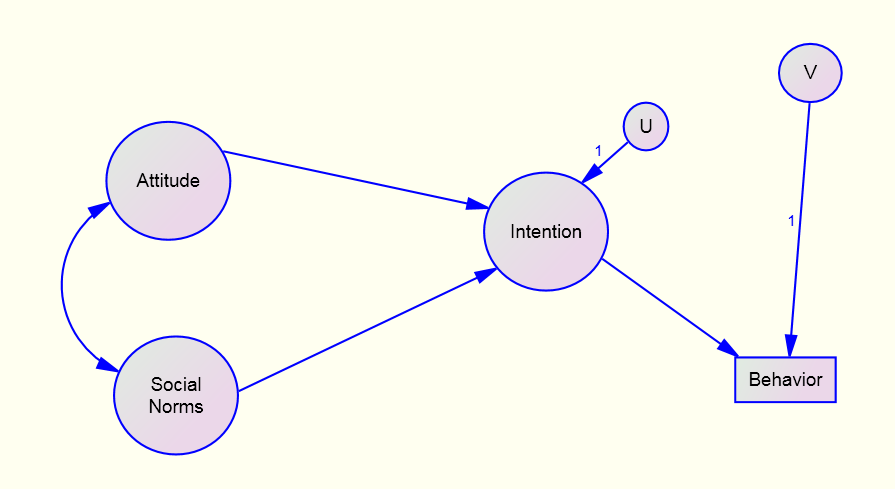 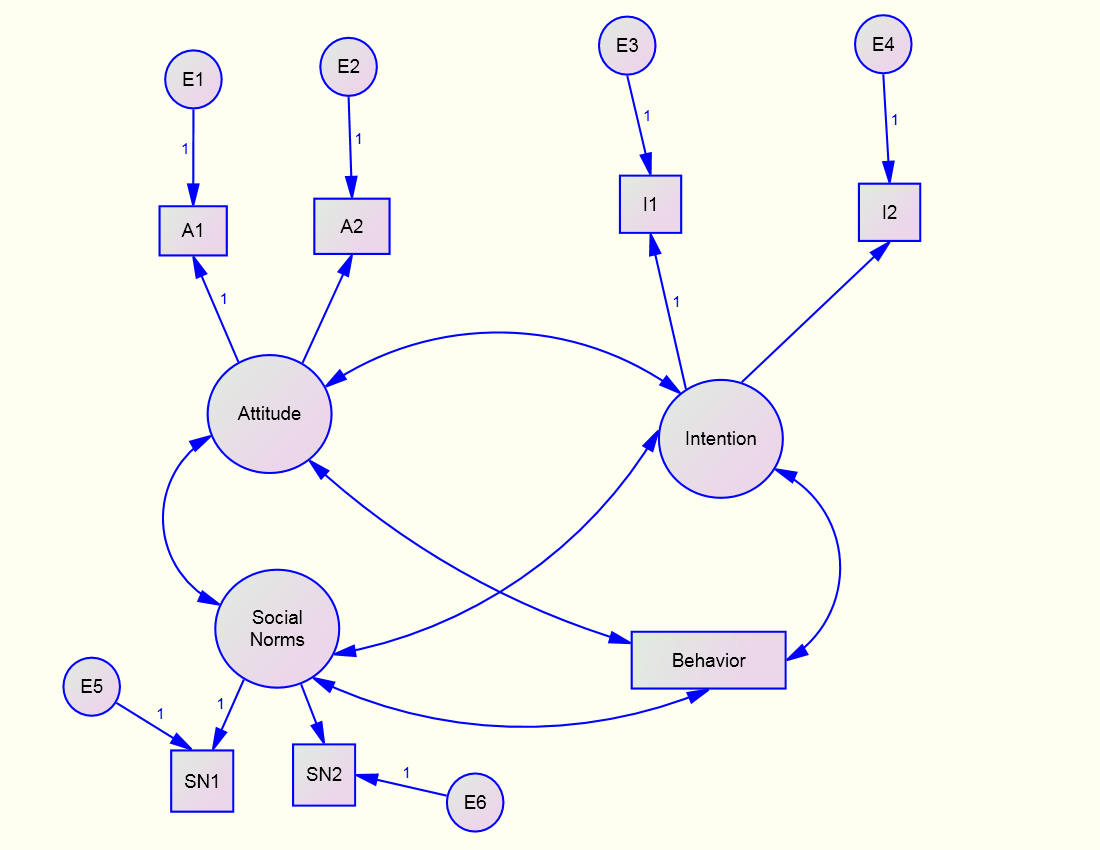 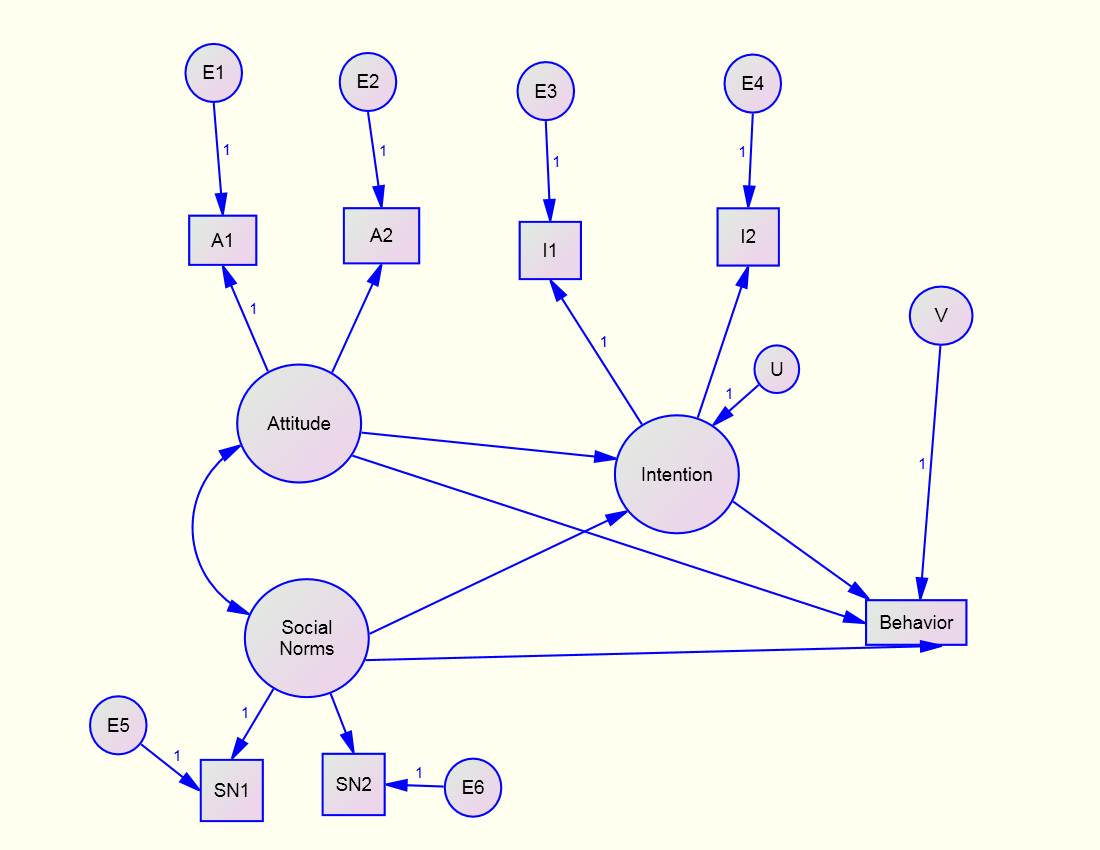 
Note that to make the structural model just-identified paths must be drawn from Attitude and Social Norms to Behavior
Fit of both models: χ²(11) = 16.09, p = .065
The Ajzen & Madden model has decent fit

What stays the same:

Chi square and the df.


Solution: Use chi-square difference test if the test is important as it does not depend on the choice of marker.
For the above example it is χ²(1) = 16.111 making the “CR” (the square root of chi square) equal to 4.014.
Williams and Hazer Option to Measurement Error
Overview
A variant of correction for attenuation
Single indicator, not multiple indicators
Must know the reliability of each measure
How
Structural Model: latent variables
Each latent variable causes its measure (path fixed to one)
Each measure has an error path (path fixed to one)
Error variance fixed to
Variance of the measure times one minus the reliability
Of for standardized data, one minus the reliability
Need to test paths using chi square difference test as CR appear to be too conservative.
Advantages
Fewer variables
Usually smaller standard errors for the paths
Easier to estimate
No Heywood cases
Fewer convergence issues
Disadvantages
No test of the measurement model
Assumes the measurement model is correct
Not so traditional and so may meet editorial objections

Standardization (being revised)
Standardization can occur at many places within the modeling process.
the raw data
the data matrix
the model specification
the transformed model
If the model is not standardized, tests refer to the model not the standardized solution. There are estimation methods based on the assumption that the correlation matrix has been entered (RAMONA), but is rarely used.  This procedure does allow the standardization of latent endogenous variables.
When to Standardize
when the units of measurement not very interpretable
desire to compare coefficients with different units of measurement
more experience with betas than b coefficients
When Not to Standardize
units of measurement are meaningful
paths are usually set equal (so in multiple groups analysis one should analyze the covariance matrix) or paths absolute values compared (e.g., dyadic analysis)
Missing Data (being revised)


Rubin and Little typology
The data are missing at random (MCAR).
Data missing due a variable in the data set which is not missing (MAR).
Data missing due to a variable that is missing or unmeasured (NMAR).
Strategies for handing for missing data – given MAR and MCAR
Data Deletion
Pairwise Deletion – can be problematic
Listwise Deletion
May result in the loss of too many cases
Sample biased: means, variances, & covariances
Imputation – Substitute a Value
Traditionally the mean
Alternatives
Regression
Maximum Likelihood
Multiple Imputation (not used often in SEM)
Full Information Maximum Likelihood (FIML)
By far the most common approach to missing data in SEM
Creates Multiple Groups
Do not get the following output in Amos
Variance-Covariance Matrix of the Measures
Modification Indices
Standardized Residuals
Some Measures of Fit
How to handle an auxiliary variables, i.e., variables in the dataset but not in the model.
Could be important with MAR.