Being revised after 8 years.

Given one of the above, one or more causal variable is correlated with the disturbance of the endogenous variable.  Thus, multiple regression cannot be used to estimate the causal coefficients. However, for each of these cases, estimation using one or more instrumental variable can be used to identify the model.

(For more details of the identification of models with instrumental variables.)

Consider first the use of an instrumental variable with an omitted variable as in the figure below: 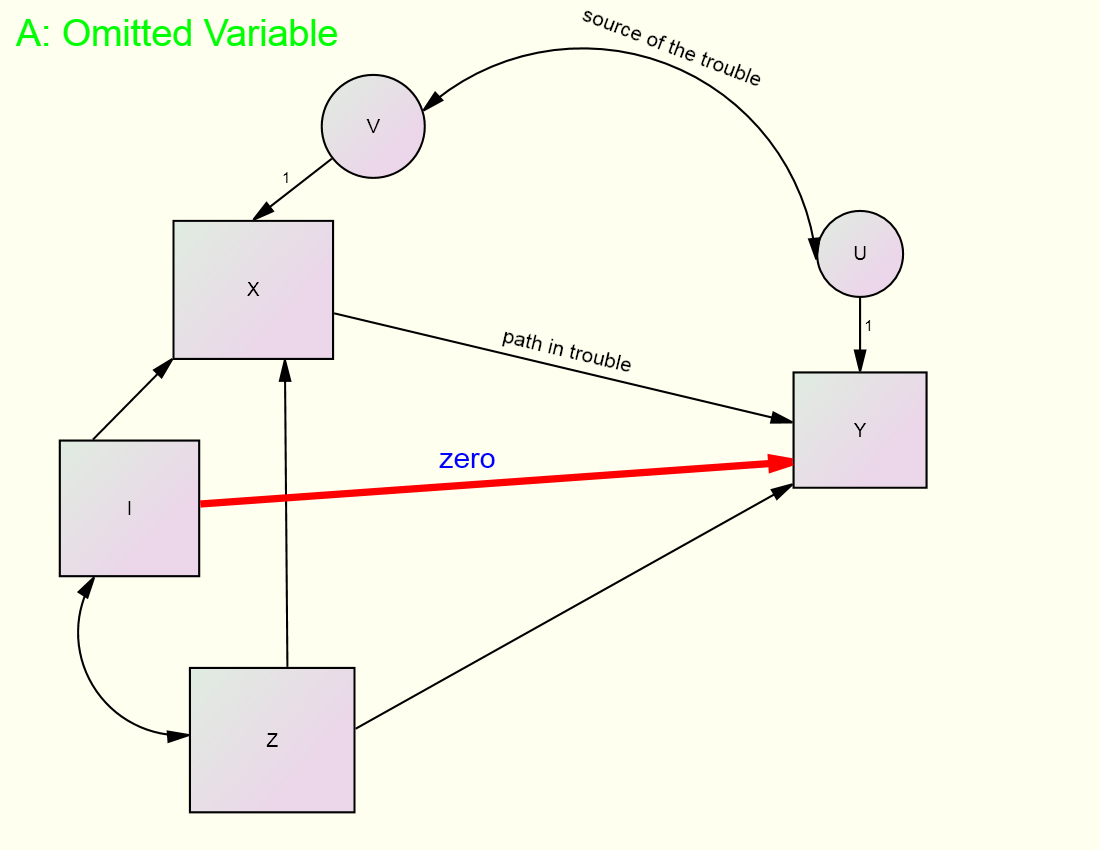 In the figure, the goal is to estimate the effect of X and Z on Y, but there is a problem.  The variable X is correlated with U, the disturbance in Y.  That correlation is due to the fact that a variable not included in the model (the omitted variable) causes both X and Y which makes the disturbances of X and Y correlated.  So the path from X to Y is “in trouble.”  However, there is an instrumental variable, variable I in the figure, which does not cause Y (the red zero path) and is not correlated with U.  Note too it must be assumed that the source of the covariation between I and X is a causal effect from I to X.  If X caused I, then I would be correlated with U which would be problematic.

Next consider the use of instrumental variables in a feedback model as in the figure below: 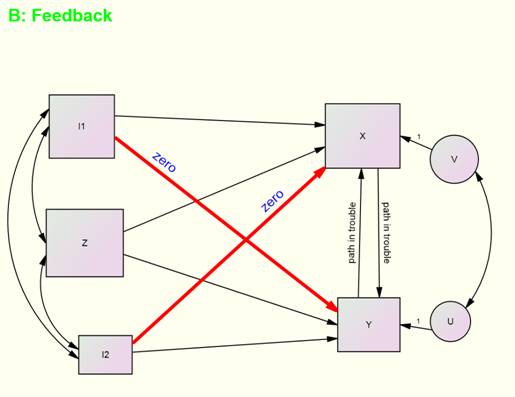 Lastly consider the use of instrumental variables with measurement error in a causal variable, as in the following figure: 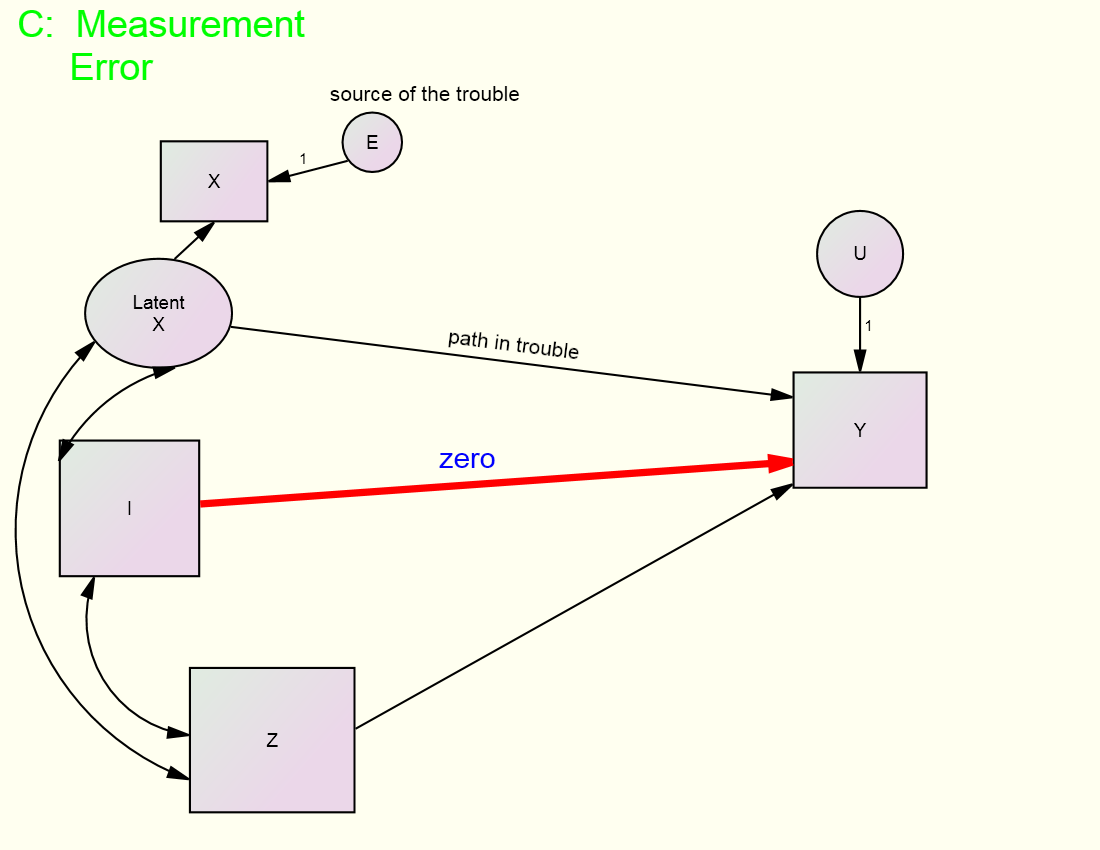 A multiple indicator strategy (see CFA webpage) is much more commonly used to identify models with measurement error but estimation using instrumental variable can also be used.  In the figure, the goal is to estimate the effects of X, actually latent X, and Z on Y, but there is a problem.  The variable X has measurement error.  So the path from X to Y is “in trouble” and the source of that trouble in the presence of measurement error in X.  There is an instrumental variable, variable I in the figure, which does not cause Y (the red zero path) and is not correlated with U to identify the model.  Instrumental variable estimation can be used to estimate the parameters of this model.  Notice too that if latent X had two indicators with correlated, the model would still be identified.

Mediation: If it is known that the effect of X on Y is mediated by M, the variable X can be used as instrumental variable to estimate the M to Y effect.  See for instance, Felson (1981) used symbolic interactionism which posits that perceptions of significant others are mediated by reflected appraisals to affect self-concept.  He used perceptions of significant others as the instrumental variable to allow for a feedback model between reflected appraisals and self-concept.

Longitudinal data: Consider three-wave data where X1 (the subscript denotes time) causes X2 which in turn causes X3, a model commonly called a first order autoregressive model.  The path from X2 to X3 is identified even allowing for measurement error in X2 by using X1 as an instrumental variable.  This strategy is discussed later when autoregressive models are presented later in this tutorial.  Note that X1 may have measurement error but that is not problematic in this case.

Compliance modeling: There is an intervention, called Treatment, to which units are randomly assigned.  Some people comply with treatment and some do not and this variable is called Compliance.  It is assumed that the effect of Treatment on Outcome works through Compliance, but the disturbance in Compliance may be correlated with Outcome.   Treatment can be used as an instrumental variable to estimate the effect of Compliance on the outcome.  Note that the indirect effect of Treatment on Outcome is the “intention to treat” effect.  To learn more consult Greenland (2000).  Note too that this strategy can be used when there is a manipulated variable and a manipulation check variable that operationalizes how it is the manipulation affects the outcome variable.

Empirically Underidentified Models
Some models with instrumental variable have empirical under-identification issues.  For instance Model A with Omitted Variables, if the path from I to X is weak, the model will be empirically under-identified. For Model B with Feedback, to identify the path from X to Y, the I1 to X path cannot be weak, and to identify the path from Y to X, the I2 to Y path cannot be weak.  Finally for model C with measurement error the partial correlation between I1 and X controlling for Z cannot be weak.  If these paths or correlations are weak, the estimates might well be wild and the standard errors large.

If a given structural equation is over-identified because there are two or more instrumental variables, a test can be made that both zero paths assumption.  The problem is that if the null hypothesis of zero paths is rejected, it is not clear which of the zero paths are non-zero.  If fact it is possible that both are non-zero.  (Note also that even if the model with multiple zero paths has good fit, it may still be the case that all of the paths are biased in the same direction, and the assumption of zero paths is invalid.  However, if there are three or more paths and only one is non-zero, it can be determined when fit is improved by freeing up one path.

Estimation of Models with Instrumental Variables

Use of Instrumental Variable Estimation Instead of Maximum Likelihood
Ken Bollen (1996) has suggested using instrumental variable estimation as an alternative to the standard maximum likelihood estimation.  One major advantage of this approach is that estimates are less sensitive to miss-specifications that occur elsewhere in the model.  Moreover, this approach can test the over-identifying restrictions for each parameter in the model.  Unfortunately, no SEM package currently offers instrumental variable estimation as an alternative.

Two-Stage Least Squares (2SLS)
An old- fashioned way to estimate such models is 2SLS, which is now described.  Even though this method is not used very often these days, by understanding 2SLS, a better understanding of how models with instrumental variables are estimated can be obtained.

Although this method is not currently used very often for the estimation of models with instrumental variables, it is instructive to understand how it works.

In actuality, 2SLS computer programs execute the two steps in a single stage or step.

2SLS Example
The structural equation for models A and C above is as follows:

where X is correlated with U. For this example, variable I serves as an instrumental variable for X in the Y equation and it must be assumed that the effect of I on Y controlling for X and Z is zero and that I and Z are uncorrelated with U.

For the Y equation:
Stage 1: Regress X on I and Z.
Stage 2: Regress Y on Z and the stage 1 predicted score for X.  The effect of the predicted X score provides an estimate of path a.

As a second example, consider the two structural equations for the feedback model B above:

For the X equation:
Stage 1: Regress X on I1 and Z.
Stage 2: Regress Y on Z, I2, and the stage 1 predicted score for X.  The effect of the predicted X score provides an estimate of path a.

For the X equation:
Stage 1: Regress Y on I2 and Z.
Stage 2: Regress X on Z, I1, and the stage 1 predicted score for Y.  The effect of the predicted Y score provides an estimate of path d.

See Johnston and DiNardo (1997) for more details about two-stage least squares and other methods of estimation for models with instrumental variables.

Sadler, P., & Woody, E. (2003). Is who you are who you’re talking to? Interpersonal style and complementarity in mixed-sex interactions. Journal of Personality and Social Psychology, 84, 80-96.