Being revised after 12 years.

**These simplifications in the model do not usually improve the model's fit and are in purple.

Those in black without asterisks may improve the fit of the model.

Step A:  Is the measurement model consistent with the data (i.e., good fitting)?

Yes, go to Step C.
No, go to Step B unless you have exhausted reasonable respecifications.  IF SO, THEN  STOP!

Step B:  Revise the measurement model.  (Go to the CFA page for other ideas.)

definition: The approximate increase in chi square if the parameter were free

sequence: a large modification index may be explained by some other specification error

Too small?  Drop the measure?**
Too large, Heywood cases?**
possible specification error
constrain error variance to be non-negative
Set the loadings equal?  (Measures should have the same metric and the covariance matrix analyzed.) **

Too small or negative: Heywood cases?**
Set the error variances equal?  (Measures should have the same metric and the covariance matrix analyzed.) **

Run a maximum likelihood exploratory factor analysis to test the number of factors (see how to do this).  (Note that this test presumes no correlated errors and so might be misleading if the true model has correlated errors.)

Check to see if a measure has large standardized residuals and modification indices (Lagrangian multipliers in EQS).  Consider dropping that measure.

Meaningfulness Rule:  Only correlate errors for which there is a theoretical rationale.

Generality Rule:  If there is a reason for correlating the errors between one pair of errors, then all pairs for which that reason applies should also be correlated.

Sometimes correlated errors imply an additional factor.  For example, if X1, X2 and X3 all have correlated errors, then consideration might be given to adding a factor on which the three load.

Which errors to correlate?

Need measures to load on more than one factor?  (Read about identification difficulties.)

When done return to Step A.

Step C:  If the structural model is just-identified go directly to Step D.

Are the deleted paths in the structural model actually zero?

Step D:  Are the specified paths of the structural model needed?

Yes, keep in model.
No, consider trimming from model.**

Even if one's model fits, there are a myriad of other models that fit as  well.  These equivalent models should be considered (see Ed Rigdon's page).  Realize that for any model, there always exist an infinite number of models that fit exactly the same.  Thus, although the fit of the structural model confirms it, it in no way proves it to be uniquely valid.

There are two strategies to take in the process of re-specifying a model.  One can test a priori, theoretically meaningful complications and simplifications of the model.  Alternatively, one can use empirical tests (e.g., modification indices and standardized residuals) to respecify the model.  All respecifications should be theoretically meaningful and ideally a priori.  Too many empirically based respecifications likely lead to capitalization on chance and over-fitting (unnecessary parameters added to the model).  Ideally, if many respecifications are made, a replication of the model should be undertaken.  Although a priori hypotheses deserve the initial focus, an examination of empirical tests of miss-specification are in order.  But if model changes are made on the basis of such tests, there still need to be some sort of theoretical rationale for them.

The study asks UCLA students to imagine that they are on a subway and they see a man lying on the ground and he appears to blind (a white cane is next to him) or drunk (an empty whiskey bottle is next do him).  Do you help this man?

(disturbances of U2 and U3 correlated)

The fit of the specified model is

Most investigators would stop here.  We adopt a different approach.

Step A: Fit of the Measurement Model or Just-identified Structural Model

The fit is good, but it might be improved.

Let us examine at the largest modification indices:

The modification indices point to the S3 (concern) loading on the Help factor.  Because this makes sense, the measurement model is revised allowing for this loading.  (One might argue that S3 should be dropped as it is not a clean indicator.)

There are no Heywood cases and all of factor correlations (except between Scenario and Control) are less than .85.  The fit of the measurement model is deemed acceptable.  We can live with this large correlation because it is in essence a manipulation check.

Step C: Test of the Deleted Paths (paths assumed to be zero)

The tests of the deleted paths are as follows:

So the only deleted path needed is the path from Scenario to Helping.  The path is negative indicating a willingness to help the control person, the blind man, than the drunk man.  The combined test of the four deleted paths is χ²(4) = 8.07, p < .10.

Step D: Test of the Specified Paths and Correlation

The correlation between the disturbances of Anger and Sympathy is set to zero. 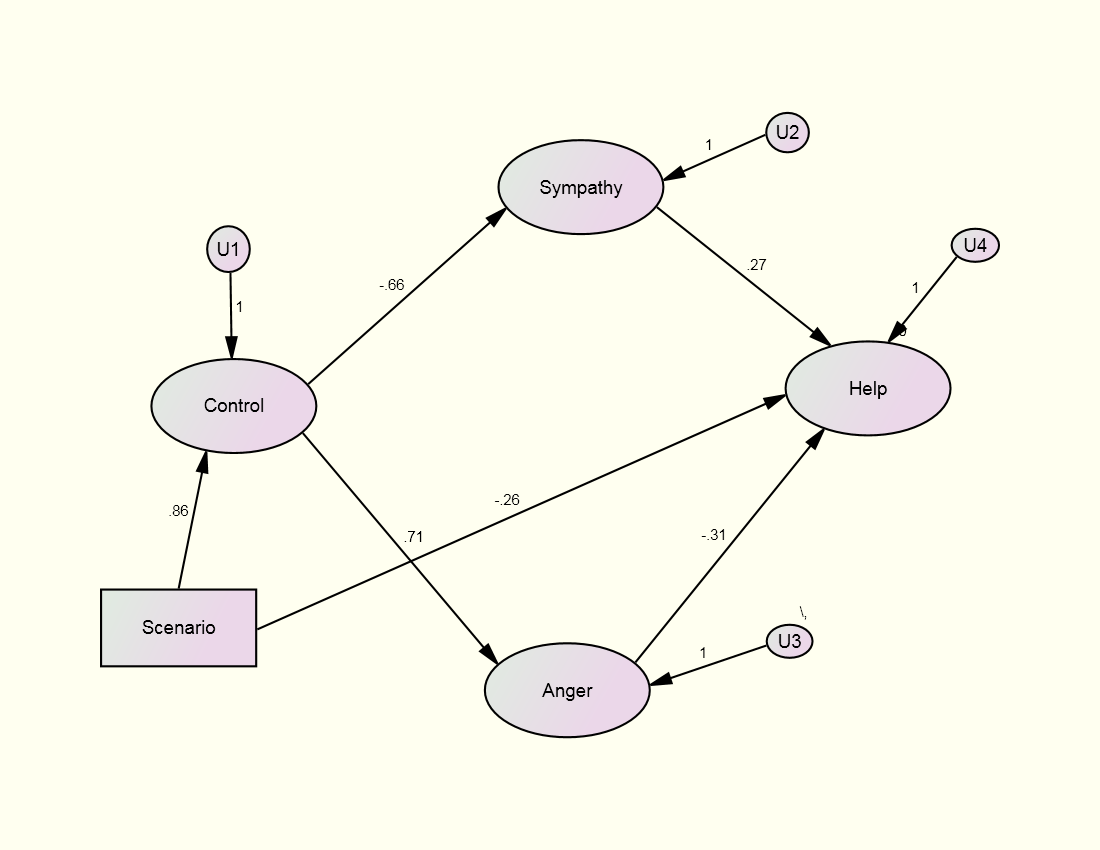